Someday Until The World Changes

Dahlia Academy Boarding School has dorms from two countries. "Nation of Touwa" and "Principality of West". However, the two neighboring countries have a hostile relations, and their relationship does not change even in the school. Because of that, the first year student leader of the Black Dogs, "Romio Inuzuka" was suffering from love. A long-time thought.... The first grade leader of the White Cats "Juliet Persia". After suffering from trouble, Inuzuka starts to move with the resolve of confession!

When Juliet was walking back to the dormitory after the incident with black dogs elementary students and made fun of by a shy Romio, she is angry and rants. Maru and his gang sneak up on her in the rose garden and pepper spray, suppress and nearly assault her though she is rescued by Romio, but the confusion that Juliet had was Romio being the mastermind, so Juliet ended up running away, crying at the same time.

Romio takes his frustration out by beating Maru and his friends effortlessly. A letter from Juliet on an arrow is shot comically on Maru's head. Romio sees it addressed to him, which tells him to meet her at the fountain.

That night, Romio finds Juliet waiting and she tells him that she hopes to solve the confusion. Juliet told Romio that if he saved her then he has to give a reason for it but if not she tells him to fight as she hates getting looked down on, especially by him since he's always holding back when they fight. Seeing her pride is important, he accepts the challenge and they fight.

When they hit a deadlock, Romio confesses to Juliet about his love towards her, which of course is shocking as Juliet blushes heavily. She attacks him furiously as he gives his reasons for saving her and holding back until he insults her about how she didn't notice. However, this angers her to the point that she knocks him down in the fountain and calls him an idiot for saying those things but is touched by them. She accepts Romio's confession and tells him she will stand by his side when he changes the world. 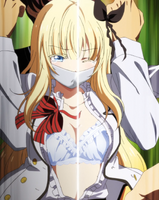 Love With You • Someday Until The World Changes
Community content is available under CC-BY-SA unless otherwise noted.
Advertisement