Dahlia Academy is a prestigious boarding school boasting an enormous student body and a vast campus. It brings together two different countries, the "Principality of West" and "Nation of Touwa". Each with their own separate dorm. The purpose of this academy is mainly for "Good Neighbor Policy" for both nations.

Note: the list below shows their current grade/year in the manga. 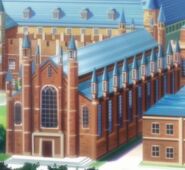 The academy is known as Grigio Academy, rather then Dahlia Academy in the special Chapter 0.

Community content is available under CC-BY-SA unless otherwise noted.
Advertisement