September 4, 2019
"Romio & Juliet" is the one-hundred-nineteenth and final chapter of the Boarding School Juliet manga series.

Seven years after the graduation, everyone gathers at the Dahlia Academy for the wedding ceremony of Romio Inuzuka and Juliet Persia, whom are united again once and for all.

After 7 years from graduating, everyone is going to the Academy for Romio's and Juliet's marriage. Everyone has changed over the years. Hasuki has become an actress while following Ragdoll's footsteps. Char has grown her hair long and helps to change Westerns' relationship with Touwa. Leon dyes her hair back to red and becomes a teacher at Dahlia Academy. Both Aby and Somali have gotten married and have two children. A lot of people are already here at the academy. The media are even here as well. Then, out of nowhere, Shuna has rushed towards everyone, saying that Romeo is in trouble, and they should see him right now.

Everyone enters and sees that Romio vomits in a bucket since he is so nervous and wants everyone to calm him down. Romio and Airu have become politicians, which means Romio's dream is coming true. Juliet also did her best. She has proposed reforms to the aristocratic system and managed to win over her people. She's now the first female viscount in the West. The world will be watching alongside the citizens, high-ranking officials, and aristocrats from both countries who will gather here today. The wedding between these two will inevitably become a symbol of appeasement for the two nations. Today might be a day of change mark in history books. In the other room, Juliet along with her parents were talking about their visiting with the Inuzuka family. Turkish and Chiwa have seen each other’s faces after so long. Ragdoll was worried and feel jealous that she grab Turkish’s arm saying that she is his wife. Chiwa was charmed by her appearance and remember her back at the academy that she is very beautiful and even now. Both she and her daughter look exactly alike. Ragdoll is surprised by her response and finds her a very kind person. They both then get along very well. The ceremony then was about to begin.

At the chapel, Romio was standing nervously, while waiting for the bride to come in. They then invited the bride along with her father. Romio is stunned by her beauty until he notices that her father is giving him a death stare. They proceed to the wedding ceremony between Romio Inuzuka and Juliet Persia. They will now exchange wedding vows. The minister asks Romio if he takes Juliet Persia as his lawful wife. He replies he does. The mister asks the bride and she does. They both then exchange wedding rings to each other, and the minister told the groom to kiss the bride. Juliet’s face was also red because she is so happy. They both then kiss in front of everyone. Hilariously, Romio was so happy that he fainted while standing. After that, everyone took pictures with the newlyweds, Juliet told Romio that they really did change the world, didn’t they? She’s glad that she met him here at the academy. 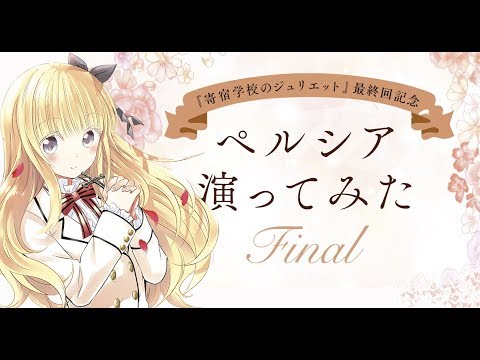